Lagerald Vick on his growing confidence, blowout of TSU 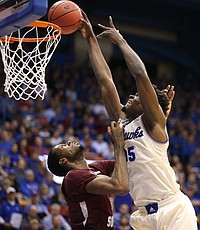 View a gallery of images from Tuesday night's game between the Kansas Jayhawks and Texas ...

The phone call was placed with the intent to be a prank, but it turned out being a premonition. Tuesday afternoon, several hours before Bill Self's third-ranked Kansas basketball team throttled Mike Davis' Texas Southern squad, 114-71, at Allen Fieldhouse, Self gave his old friend a ring and reminder. By Matt Tait.

Tom Keegan: Self not one to coach to a game's score

No one can ever accuse Kansas basketball coach Bill Self of not practicing what he preaches to his players regarding not playing to the scoreboard. By Tom Keegan

He made nine of 12 shots, finished one rebound shy of a double-double (20 point and nine boards) and added a steal, a block and assist and two fouls in 27 minutes. But the main thing on the mind of Kansas coach Bill Self about big man Udoka Azubuike following Tuesday’s 114-71 whipping of Texas Southern at Allen Fieldhouse was one of the things Azubuike did wrong. By Matt Tait

The first half of Tuesday's game in Allen Fieldhouse resembled that of a Harlem Globetrotters’ scrimmage far more than a competitive game. Then again, it wasn't really that either. By Scott Chasen