View a gallery of images from Friday night's game between the Jayhawks and Tigers at ... 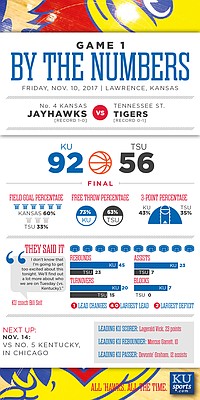 Marcus Garrett talks about his first start at KU

After months of buildup and anticipation, the college basketball season officially arrives Friday night, as No. 4-ranked Kansas opens its 2017-18 schedule at Allen Fieldhouse, against Tennessee State.