The Kansas basketball team’s postseason began in a fashion the Jayhawks had mastered in the previous months: overcoming a dangerous deficit. For the ninth time this season, the nation’s No. 1-ranked team found itself in a double-digit hole, but for just the second time this season, KU came up short, losing 85-82 to TCU. By Benton Smith

Forced to play without freshman All-American Josh Jackson for the first time in 32 tries this season, the Kansas men’s basketball team looked even thinner than normal, was out of sorts at times and struggled mightily at others in an 85-82 loss to eighth-seeded TCU in the Big 12 championship quarterfinals at Sprint Center. By Matt Tait

Tom Keegan: Mason, Lucas couldn't do it all in Big 12 tourney loss

The Kansas quarterfinal exit from the Big 12 basketball tournament Thursday underscored the importance of freshman Josh Jackson staying out of foul trouble and parking lots. By Tom Keegan

The easy answer was that top-seeded Kansas lost Thursday’s Big 12 quarterfinal to TCU at Sprint Center because the No. 1-ranked Jayhawks played without suspended guard Josh Jackson. By Matt Tait 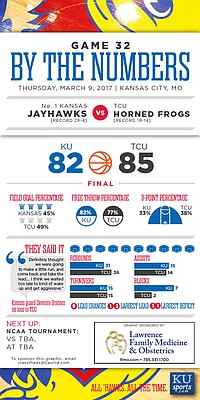 For the first time this season, the Kansas Jayhawks, now ranked No. 1 in the country, will play without starting guard Josh Jackson. It will be up to capable veterans Frank Mason III, Devonte’ Graham and Landen Lucas to carry KU (28-3) past TCU (18-14) in a Big 12 quarterfinal at Sprint Center, in Kansas City, Mo.