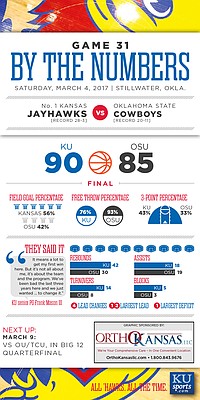 In his four years at Kansas, point guard Frank Mason III has accomplished much for the Jayhawks. But he never had experienced a win at Oklahoma State. Until Saturday night. Displaying the type of toughness and ability to come through with crucial plays that have defined his stellar senior year, Mason led No. 1 KU to a 90-85 victory by doing it all. By Benton Smith

One more on the road: Mason carries Jayhawks to win at OSU

In the final act of his regular-season audition for national player of the year, Kansas senior Frank Mason III turned in one of those games that could not be ignored. Twenty-seven points. Nine assists. Eight rebounds. One victory. By Matt Tait

To win this one, Kansas needed more than senior Frank Mason III effectively locking up national player-of-the-year honors and Josh Jackson again showing just how much a freshman so driven and talented can improve in every area of his game over the course of a season. This one wasn’t going to be won without a serious contribution from KU’s once-maligned bench. By Tom Keegan

Snake-bitten in his home state by his alma mater more times than he’d care to remember, Kansas coach Bill Self walked out of Gallagher-Iba Arena on Saturday with his first victory there since 2013, 90-85 over Oklahoma State. By Matt Tait

Frank Mason tops ratings in Stillwater with near triple-double 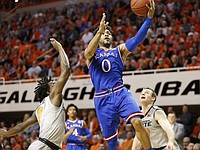 Now ranked No. 1 in the nation, the Kansas basketball team secured the program’s 13th consecutive Big 12 title three games ago. Playing for pride and a possible No. 1 overall seed in the NCAA Tournament at this point, the Jayhawks (27-3 overall, 15-2 Big 12) wrap up the regular season on the road against another team bound for March Madness, Oklahoma State (20-10, 9-8).