Moments before tip-off, David Dyer was unequivocal about the Jayhawks’ chances in their Elite Eight contest against the Oregon Ducks. “Ten out of ten,” Dyer said of his confidence level. The Kansas City, Kan. visitor had hardly gotten the words out of his mouth before University of Kansas freshman phenom Josh Jackson got his second foul. It ended up being that type of night in Downtown Lawrence, where any bar with a good set of T.V.s was full, but the downtown all evening was a bit like the Jayhawks — far from electric. 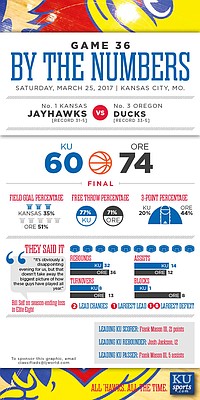 Bill Self: KU settled for ‘marginal’ shots in Elite Eight loss to Oregon

Frank Mason tops ratings in loss to Oregon and for season

View a gallery of images from the Jayhawks' Elite Eight matchup against the Ducks on ...

Entering Saturday’s Elite Eight game against Kansas at Sprint Center, the Jayhawks’ home away from home, Oregon basketball players were happy to play the role of the underdog. By Bobby Nightengale

Saturday’s 74-60, Elite Eight loss to Oregon at Sprint Center left a handful of Jayhawks to face questions about their futures. By Matt Tait