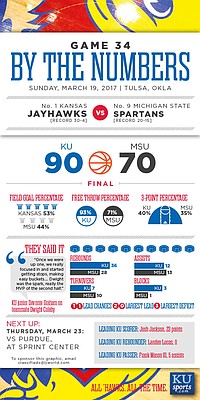 Devonte’ Graham: Jayhawks’ offense hard to stop in Round 2 win

The Kansas Jayhawks are coming home, and when they get there, a date with Purdue in the nearby NCAA Tournament will be waiting. By Matt Tait

Tom Izzo on Jayhawks in tournament: 'They have a good chance to have some success'

After Kansas advanced to the Sweet 16 with a 90-70 second-round victory at BOK Center, Michigan State coach Tom Izzo said the Spartans lost to the better team. By Bobby Nightengale

Tom Keegan: Jayhawks refuse to back down in tough games

Saturday afternoon, inside a locker room that one day later would turn into the scene of a bunch of smiles and satisfaction, Kansas freshman Josh Jackson was asked by a handful of Michigan State reporters why he chose Kansas over MSU. By Matt Tait