View a gallery of images from Friday's first-round game between the Jayhawks and Aggies at ...

Sviatoslav Mykhailiuk had the ball in the left corner and the pro-Kansas crowd in his ears midway through the second half of Friday night’s NCAA tournament opener for the Jayhawks. By Tom Keegan

Top-seeded Kansas to face No. 9 seed Michigan State in 2nd round Sunday

For the second year in a row, the Jayhawks’ second-round foe will be a team that has reached a Final Four more recently than Kansas, as No. 9 seed Michigan State knocked off No. 8 Miami, 78-58, in Friday's final game at BOK Center. Last season, KU knocked off UConn in the second round in Des Moines, Iowa. By Matt Tait

The UC Davis Aggies did all they could to hang around and compete with Kansas on Friday night at BOK Center. But then the Jayhawks unleashed a barrage of plays, some believable, others not, that reminded everyone watching why KU spent most of the season ranked in the Top 5. By Matt Tait

Jayhawks make the most of UC Davis technical foul

It doesn’t take much to spark the No. 1-seeded Kansas basketball team, and perhaps, all it took was one whistle Friday. By Bobby Nightengale 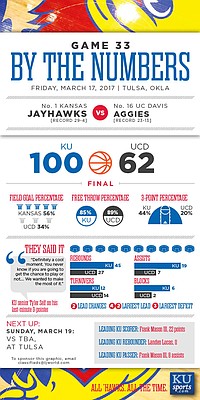 On a night when the Kansas men’s basketball team reached the century mark for just the second time this season, all anybody wanted to talk about was the Jayhawks’ defense. By Matt Tait