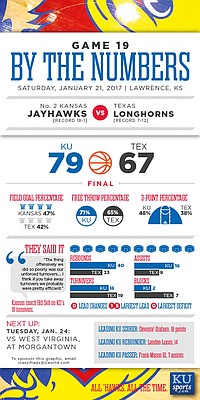 For Starters: Jayhawks set tone early in 79-67 win over Texas

It’s not often that what happens in the first 4:19 of a college basketball game teases how things will read when the final horn sounds at the end of the second half. By Matt Tait

Baseline View: Kansas battles to a 79-67 win over Texas

View a gallery of images from Saturday's game between the Jayhawks and Longhorns at Allen ...

Tom Keegan: Graham not afraid to turn from scorer to facilitator

Playing so fast, yet so under control, junior guard Devonte’ Graham gave his team such a big early cushion with which to work, an 18th consecutive victory never felt in jeopardy for Kansas, which dropped Texas, 79-67, Saturday in Allen Fieldhouse, where the Jayhawks have won 50 in a row. By Tom Keegan

His shooting form made headlines well before Josh Jackson ever suited up for the Kansas men’s basketball team. By Matt Tait

Devonte' Graham tops ratings vs. Texas with terrific first half