Baseline View: Jayhawks get another big road win against Baylor

Most of the 10,021 in Ferrell Center whistled, waved, hollered and did whatever else they thought might influence Landen Lucas to miss at the free-throw line with the game tied and 11.5 seconds showing on the clock. By Tom Keegan

View a gallery of images from Saturday's game between the Jayhawks and Bears in Waco, ...

With the unflinching approach the Kansas basketball team has shown all season long, the Jayhawks took a major step toward the program’s 13th-consecutive Big 12 championship Saturday afternoon, with a 67-65 road victory at Baylor. By Benton Smith 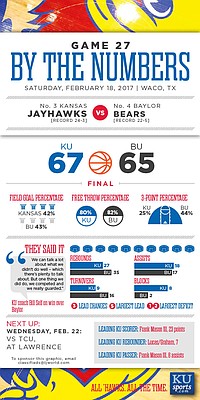 As the Kansas Jayhawks filed off the floor of Baylor’s Ferrell Center on Saturday afternoon, some looking exhausted, others with arms raised in victory, assistant coach Jerrance Howard hollered instructions on the way back to the locker room. By Matt Tait

When two of the nation’s top teams square off in Waco, Texas, No. 4 Baylor will attempt to end the program’s nine-game losing streak against the Big 12’s marquee team, No. 3 Kansas. Coach Scott Drew’s Bears (22-4 overall, 9-4 Big 12) have only won four of their past 12 games against top-five teams over the past several seasons. This marks the fifth top-10 matchup for Bill Self’s Jayhawks (23-3, 11-2) this year. KU enters the game at Baylor 4-0 versus top-10 opponents.

— Get updates during the game and after at our live blog.