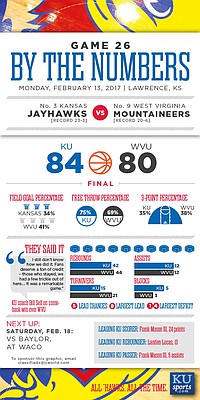 The Kansas basketball team hadn’t lost consecutive games inside Allen Fieldhouse since the 1988-89 season entering a top-10, Big Monday clash with West Virginia. By the end of a long night for the Jayhawks’ offense, 14th-year KU head coach Bill Self still had yet to experience back-to-back home losses. By Benton Smith

The fans who turned their backs on the court and headed for the exit ramps as West Virginia led by 14 points with fewer then three minutes remaining, just might have been muttering, “Where have you gone, Devonte’ Graham? It seemed like just yesterday you outplayed the best player in the country.” Fair question, but those who left were not able to witness Graham’s return to prominence, not to mention a once-in-a-lifetime team comeback. By Tom Keegan

Kansas basketball coach Bill Self talks about his team's 84-80, overtime victory over West Virginia. The Jayhawks trailed by 14 points with under three minutes to play.

View a gallery of images from Monday night's game between the Jayhawks and Mountaineers at ...

Game blog from Allen Fieldhouse: No. 3 Kansas vs. No. 9 West Virginia

The Kansas basketball team hasn’t lost consecutive games inside Allen Fieldhouse since the 1988-89 season. The No. 3 Jayhawks, who pulled off back-to-back road wins last week after seeing their home winning streak end at 54 games against Iowa State, look to start a new streak — and avoid a rare home skid — on Big Monday versus No. 9 West Virginia. The Mountaineers (20-5 overall, 8-4 Big 12) defeated KU (22-3, 10-2) in Morgantown, West Virginia, on Jan. 24.