Senior leader Frank Mason III can’t carry the offensive load every game for Kansas. So his freshman teammate Josh Jackson came through with his best Mason impersonation Saturday afternoon at Texas Tech, in an 80-79 KU road win. By Benton Smith 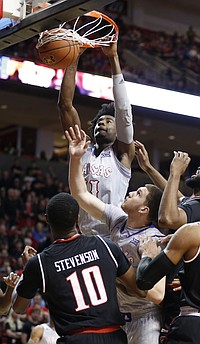 View a gallery of image from Saturday's game between the Jayhawks and Red Raiders in ...

Tom Keegan: Growing with each game, Jackson doesn't play like a freshman

Josh Jackson arrived at Kansas with a sophisticated basketball mind and perpetually revved motor, but in the months of November and December he flashed teenager moments. By Tom Keegan

Battling an illness throughout the week but still able to practice, Kansas senior Frank Mason III gutted out a season-low 26 minutes to help No. 3 Kansas hold off a serious threat by Texas Tech, 80-79, on Saturday at United Supermarkets Arena. By Matt Tait

If Saturday was any indication of how the 20th year of his life is going to go, Kansas freshman Josh Jackson is in for a heck of a ride. By Matt Tait 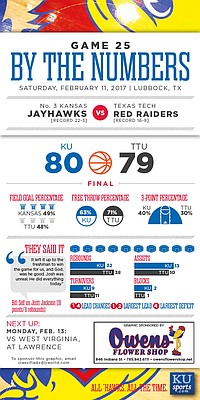