No. 3 Jayhawks prevail against No. 2 Baylor

Even facing the No. 2 team in the nation and playing without one of its top frontcourt players didn’t stop No. 3-ranked Kansas, which won its 51st consecutive game inside Allen Fieldhouse, 73-68, Wednesday night against Baylor. By Benton Smith

View a gallery of images from Wednesday night's game between the Jayhawks and Bears at ...

Tom Keegan: The biggest games bring out the best in Josh Jackson

Back-to-back games against top-five teams, one in enemy territory with more than 24,000 rooting against him, the other in the building that supplies college basketball’s most outrageous home-court advantage. Time for Josh Jackson to show the nation how much he loves to play basketball, how much he loves to win. By Tom Keegan 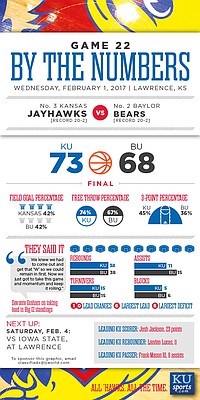 These are the games that get remembered when a team rips off a streak that is talked about in every conference town and at the beginning and end of every college basketball season. By Matt Tait

About 30 minutes after the third-ranked Jayhawks secured a 73-68 victory on Wednesday night over No. 2 Baylor at Allen Fieldhouse, junior guard Devonte’ Graham found himself laughing while thinking back to a question posed by KU coach Bill Self to his team a couple of weeks ago. “It’s funny, because coach asked us if we would rather be down two with the ball or up two and have to get a stop (to win),” Graham began. By Matt Tait