As Kansas opened Big 12 play Friday night at Frank Erwin Center, it didn’t take long for Texas freshman Mohamed Bamba to establish himself as a force inside defensively, what with his 7-foot-9 wingspan and active hands and feet. So the No. 11 Jayhawks used one of their greatest strengths, their 3-point shooting, to avoid the dangerous Bamba and win, 92-86, in Austin, Texas. By Benton Smith

Marcus Garrett sure has impeccable timing. After making the first start of his career in KU's home opener this season against Tennessee State on Nov. 10, Garrett picked up his second start on Friday night in the Jayhawks' Big 12 opener at Texas. By Matt Tait

Mohamed Bamba played his first Big 12 game Friday night at Frank Erwin Center against visiting Kansas and made it a memorable one for everyone in attendance. Kansas won the game, 92-86, on the strength of 3-point shooting, and Bamba kept the Longhorns in it, flirting with a triple-double. Bamba dominated the paint in the first half and finished with 22 points, 15 rebounds and eight blocked shots. By Tom Keegan 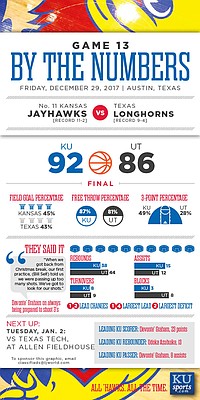 View a gallery of images from the Jayhawks' matchup against the Longhorns, Friday at Frank ...