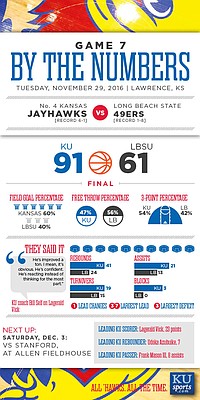 Tom Keegan: Vick proves to be the perfect complement for KU's backcourt

Larry Brown has worn stylish glasses for decades, but don’t let that fool you. There never has been anything wrong with Brown’s basketball eye. By Tom Keegan

Kansas senior Landen Lucas was held out of Tuesday’s 91-61 victory over Long Beach State for what KU coach Bill Self described as “a little strain in his oblique or whatever it is in his side.” Lucas, who has struggled to regain the form that made him a key member of last year’s Elite Eight squad, suited up and went through warm-ups but never ditched the warm-up pants. By Matt Tait

There are a variety of numbers one could point to while trying to demonstrate just how fast fourth-ranked Kansas played during Tuesday’s 91-61, run-away victory over Long Beach State at Allen Fieldhouse. By Matt Tait