View a gallery of images from the Jayhawks' matchup with the Bulldogs on Tuesday at ...

Kansas senior Frank Mason III, listed at 5-feet-11, 190 pounds, entered the night averaging 22.3 points, and came out of it having led his team in scoring in four of five games. Georgia’s 5-10, 155-pound J.J. Frazier came in averaging 18.8 points. The showdown never materialized for a couple of reasons. By Tom Keegan

After playing just three minutes, missing his only shot and grabbing just one rebound during Monday night’s 20-point Kansas win over UAB, junior forward Dwight Coleby was not quite sure what to tell his father. By Matt Tait 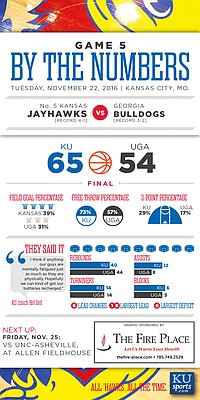 This Kansas team, at least through five games, appears as if it will go as Frank Mason III, Devonté Graham and Josh Jackson go on most nights. Luckily for the Jayhawks, that trio went very well on Tuesday during a late-tip, 65-54 victory over Georgia in the CBE Hall of Fame Classic championship game at Sprint Center. By Matt Tait