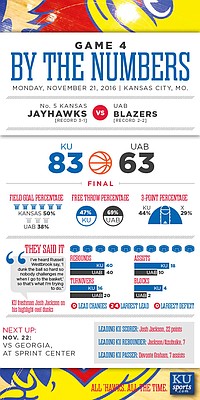 View a gallery of images from the Jayhawks' Monday night game against the Blazers at ...

Tom Keegan: Azubuike continues to grow through each game

The sooner Udoka Azubuike builds up his stamina and learns to play without piling up fouls so quickly, the sooner Kansas can become a team that does more than dominate teams from the perimeter. By Tom Keegan

KU's Jackson, Mason and Graham combine for 58 points in win over UAB

Sure, the No. 5-ranked Kansas basketball team utilized its much discussed four-guard lineup options Monday night at Sprint Center against UAB. Really, though, the Jayhawks leaned on just three of their perimeter players on the first day of the CBE Classic.

It’s the SEC and the Big 12 in the championship game of the 2016 CBE Classic. Because of its 83-63 victory over UAB on Monday night, the Kansas men’s basketball team at 9 p.m. tonight will take on Georgia. By Matt Tait

Game blog from Sprint Center: No. 5 Kansas vs. UAB

The Jayhawks’ hectic November schedule continues Thanksgiving week, with No. 5 Kansas facing UAB at Sprint Center, in Kansas City, Mo., on Monday — the first of three games in a five-day stretch.