KUsports Extra: Win No. 207 for Bill Self at Allen Fieldhouse

As everyone knows by now, the Kansas coach has more Big 12 regular-season titles (12) than Allen Fieldhouse losses. No school has beaten him twice in his favorite building. Richmond, Iowa State, Nevada, Kansas State, Oral Roberts, Texas A & M, Texas, Oklahoma State and San Diego State each have gotten him once, but no school twice. By Tom Keegan

For the third consecutive game to open his senior season, KU forward Landen Lucas spent more time laboring and less time on the floor than he did during the final stretch of his sensational junior season, when he proved to be an indespensable part of KU’s Elite Eight team. By Matt Tait

In a bit of an anti-climactic home opener, the No. 7-ranked Kansas basketball team, coming off games against Indiana and Duke, handled Siena, but struggled to put the visitors away until the final minutes in an 86-65 victory Friday night at Allen Fieldhouse. By Benton Smith

View a gallery of images from the Jayhawks' Friday night matchup against the Saints at ... 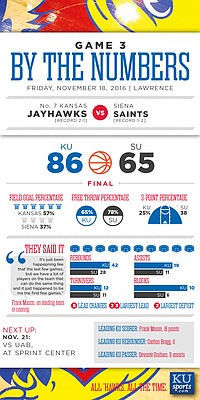