Duke basketball coach Mike Krzyzewski had nothing but good things to say Tuesday night about the seventh-ranked Kansas squad that knocked his Blue Devils from the ranks of college basketball’s unbeaten. By Matt Tait

Foul trouble again tried to steal Kansas freshman Josh Jackson from the spotlight on Tuesday night. But after a slow and uncertain start to the Champions Classic clash with No. 1 Duke at Madison Square Garden, Jackson refused to allow that to happen.By Matt Tait

It doesn’t take an entire village to beat Duke, the nation’s top-ranked college basketball team. But it does take a bench, and Kansas certainly had one of those Tuesday night in Madison Square Garden, the self-anointed world’s greatest arena. By Tom Keegan 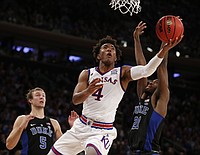 View a gallery of images from the Jayhawks' Tuesday night game against Duke in the ...

Not this time: Jayhawks avoid OT, second loss by knocking off Duke

Even if they would have come against two highly-ranked, well-known programs, the Kansas Jayhawks weren’t interested in starting the season 0-2. Following a timeout with 8.2 seconds to play in regulation, senior KU guard Frank Mason nailed a dagger pull-up jumper to beat No. 1 Duke, 77-75, Tuesday night at the Champions Classic, inside New York’s Madison Square Garden. By Benton Smith

It’s not often that the Kansas basketball team faces other blue blood programs in back-to-back games outside of the NCAA Tournament. But that’s exactly how the Jayhawks are opening this 2016-17 season. Coming off an overtime loss to Indiana in Honolulu, No. 7 KU goes for its first win of the year against No. 1 Duke.