Moments before boarding the team bus in a rush attempt to head straight to the airport to catch one of three KU flights from Honolulu to New York City, Kansas coach Bill Self found himself lamenting the biggest of a few crucial mistakes — by the Jayhawks and others — that cost Kansas in a 103-99, overtime loss to Indiana. By Matt Tait

Even though Friday’s season opener between No. 3 Kansas and No. 11 Indiana featured two of the top teams in the country and carried with it an NCAA Tournament feel, KU coach Bill Self said the result was secondary in the big picture of the young 2016-17 season. By Matt Tait 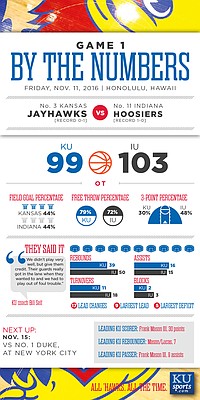 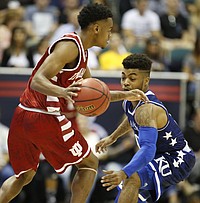 View a photo gallery from the Jayhawks' season opener against Indiana as part of the ...

It’s hard to imagine a more exciting way to open the college basketball season. Who needs a tuneup against a seldom-heard-of directional school when you can make your 2016-17 debut in Honolulu against Indiana? No. 3-ranked Kansas gets started in fashion tonight against the No. 11 Hoosiers at ESPN’s Armed Forces Classic.