The highly-anticipated debut of Kansas basketball’s latest freshman phenom, Josh Jackson, didn’t start out the way most inside Allen Fieldhouse Tuesday night anticipated. But the No. 3-ranked Jayhawks didn’t need their likely lottery pick to do it all in a 92-74 exhibition victory over Washburn. By Benton Smith

Never one to pass up a chance to deliver constructive criticism in a way that sticks, Kansas basketball coach Bill Self included a little of that in telling senior Frank Mason he had a good game Tuesday night as the guard checked out for the final time. By Tom Keegan

Kansas freshman Josh Jackson, senior Frank Mason III and junior Svi Mykhailiuk talk about their basketball team's 92-74 exhibition victory over Washburn. Jackson said he was nervous in the first half for his first unofficial game and Mason was disappointed ... 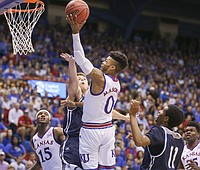 View a gallery of images from the Jayhawks' exhibition against Washburn on Tuesday, Nov. 1 ...

But Bill Self not pleased with guard's turnovers

Mason leads No. 3 Kansas vs. Washburn

The highly-anticipated debut of Kansas basketball’s latest freshman phenom, Josh Jackson, didn’t start out the way most inside Allen Fieldhouse Tuesday night anticipated. But the No. 3-ranked Jayhawks didn’t need their likely lottery pick to do it all in a 92-74 exhibition victory over Washburn.

Jackson, who finished with 14 points (6-for-12 shooting) and four rebounds, went scoreless in nine first-half minutes and didn’t convert his first basket until more than six minutes into the second.

Still, with senior point guard Frank Mason III asserting his will with the ball in his hands, driving for baskets and assists, and junior backup wing Svi Mykhailiuk finding his shooting stroke, the Jayhawks didn’t exactly miss Jackson’s production against the Ichabods. Mason posted 21 points, nine assists and added 10 rebounds while flirting with a triple-double. Mykhailiuk nailed four of his six three-pointers and added 16 points.

KU certainly didn’t look crisp on offense, turning the ball over 24 times. But WU’s defense couldn’t stop Bill Self’s players when they took care of the ball. Kansas shot 54 percent from the floor and went 10-for-22 from behind the three-point line, making for an easy enough victory.

• The game turned when: The Jayhawks put together a few strong minutes to close the first half, carried by their 3-point shooting. The Ichabods stayed within single digits or so of the Jayhawks deep into the first half. When Mason hit a three at the 5:12 mark, KU began building a little momentum. A Mykhailiuk three soon followed, and the junior wing from Ukraine was just getting started. The man known as “Svi” nailed another from downtown to build a 14-point lead with 2:35 left until the break, and later drained his third three-pointer of the half to beat the buzzer and send Kansas to the locker room with a 50-34 advantage.

Though Washburn didn’t cave early in the second half, the Jayhawks had all the separation they needed.

• Offensive highlight: After freshman big man Udoka Azubuike worked hard from block to block, looking for a post feed, Mason drove and rewarded the youngster with a perfect pass above the rim for an alley-oop. Azubuike’s first basket came emphatically less than four minutes into the game thanks to Lucas drawing two quick whistles, paving the way for the freshman’s minutes. But Azubuike didn’t get an opportunity to build up his confidence, because he fouled three times in three minutes and sat the final 15 minutes of the first half.

• Defensive highlight: Washburn’s Brady Skeens decided early in the first half to challenge Azubuike and promptly had his attempt swatted out of bounds. The 7-footer from Nigeria followed up the first of his two blocks on the night (before fouling out in eight minutes) with a little “no-no” wag of the finger.

• Key stat: Rebounding. It’s well documented how much Self values controlling the glass, and the Jayhawks failed to live up to their coaches’ standards against an undersized Washburn team. Not only did the Ichabods out-board KU, 45-44, they turned 19 offensive rebounds into 16 second-chance points. The next few practices don’t figure to be too enjoyable for KU — the team’s bigs, in particular. Lucas and Bragg combined for three rebounds, while Mason led the team with 10 boards.

• Up next: The Jayhawks will be back in Allen Fieldhouse Sunday night for their final preseason tuneup, versus Emporia State. The exhibition, which comes five days before the regular-season opener versus Indiana, tips off at 7 p.m.