Prep bigs Maker and Ayton to play for World Team

Two of the top big men in the country, senior Thon Maker and junior DeAndre Ayton, who both are considering attending Kansas, will play for the World Team in the Nike Hoop Summit, set for April 9 in Portland, Ore.

Bill Self: Elite Eight loss 'hard for everybody'

Kansas basketball coach Bill Self, as well as his players, hoped Louisville wouldn’t be their last stop of the 2015-16 season. By Gary Bedore

Seniors likely not only players KU will lose

Seniors Perry Ellis, Jamari Traylor, Hunter Mickelson and Evan Manning have completed their basketball careers at Kansas University. Some additional players could also be moving on, the futures of some non-seniors to be decided in coming weeks. By Gary Bedore

Sure, there were chances at the end, a five-point, second-half lead, even. But the reality is Villanova won Saturday night’s Elite Eight game in the KFC Yum! Center by making Kansas University lose it, 64-59, with as bad a seven-minute stretch of basketball as it had played in months. By Tom Keegan

Although it looked at the time like No. 2 seed Villanova was on the verge of melting down, Wildcats coach Jay Wright said an early timeout his team took after a hot second-half start by Kansas might have been the best thing that could’ve happened. By Matt Tait 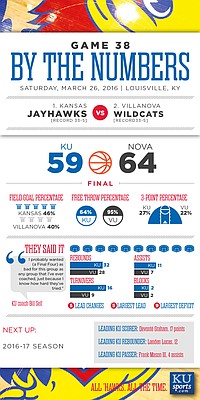 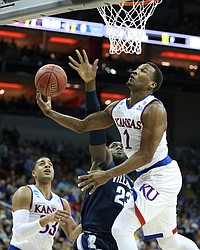 Kansas basketball coach Bill Self, as well as KU seniors Perry Ellis and Jamari Traylor, describe the issues that came up for the Jayhawks in a 64-59 loss to Villanova in the Elite Eight. The loss, one game shy of ...