Former Kansas guard Jerod Haase, the fourth-year head coach at UAB, is one of the leading candidates to fill the Stanford vacancy, CBSSports.com reported Thursday. By Gary Bedore 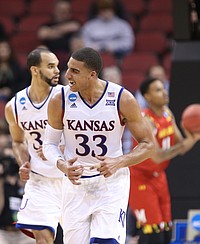 In a city and state known for horse racing, the Kansas University men’s basketball team saddled up its Thoroughbred on Thursday night at the KFC Yum! Center and rode him into the Elite Eight. KU senior Perry Ellis scored a tournament-high 27 points on 10-of-17 shooting and 7-of-7 from the free-throw line to lead the Jayhawks to a 79-63 victory over fifth-seeded Maryland in the Sweet 16. By Matt Tait

Like Kansas University’s current basketball players, Aaron Miles played in a huge NCAA Tournament game against Maryland. “No bueno,” Miles said with a smile, referring to KU’s 97-88 Final Four semifinal loss to the Terps on March 30, 2002 in Atlanta. By Gary Bedore 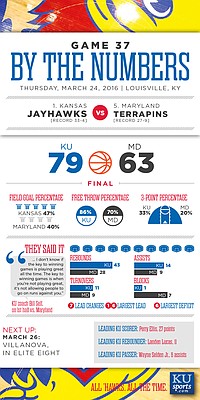 He beat out a pair of McDonald’s All-Americans in practice daily to earn a spot in the starting lineup, so it probably shouldn’t come as a surprise that Landen Lucas beat up another hamburger All-American to help Kansas University advance to the Elite Eight. Maryland freshman Diamond Stone showed early why he projects as a one-and-done, first-round talent and Lucas proceeded to take him right out of the game so that he could do what he does best, dominate the boards. By Tom Keegan