Austin Peay hit 41 percent of its shots in a 105-79 loss to Kansas in the first round of the NCAA Tournament on Thursday at Wells Fargo Arena.

Lagerald Vick, who hadn’t played at all in seven of the Jayhawks’ past 11 games and earned a combined 10 minutes in the other four contests, admitted to being “excited” when coach Bill Self told him to enter Thursday’s NCAA Tournament game against Austin Peay with 14:15 left, KU up 17. By Gary Bedore

Stressed out over the poor timing of Joel Embiid’s back injury two years ago and last March by the NCAA’s docking of Cliff Alexander, Kansas University’s basketball coach is back to his smooth self. Bill Self’s not mad in March. He’s not uptight, and if he can stay that way, his players will continue to play with the confidence they have displayed during a 15-game winning streak. By Tom Keegan

All week, during their preparation for a first-round matchup with No. 1 overall seed Kansas University in the NCAA Tournament, the Austin Peay Governors focused on names like Ellis, Selden, Mason and Graham. And then a guy who entered the tournament as the Jayhawks’ fifth-leading scorer at 5.7 points per game in an average of 13 minutes, checked in early in the first half and blew up their plans. By Matt Tait 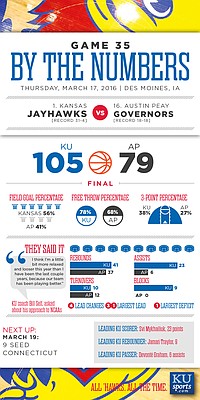 No. 1 overall seed Kansas rolled to a 105-79 first-round NCAA Tournament victory over 16 seed Austin Peay on Thursday afternoon at Wells Fargo Arena. The 105 points marked the most in an NCAA Tournament game since 2007, when the Jayhawks scored 107 in a first-round win over Niagara. By Matt Tait