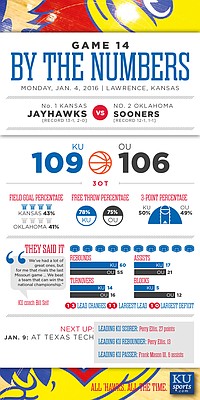 Game blog from Allen Fieldhouse: No. 1 Kansas vs. No. 2 Oklahoma

The clash between the No. 1 and No. 2 ranked teams in the nation did not disappoint, as Kansas and Oklahoma put on a fantastic display of basketball with enough energy and emotion to call it a street fight in front of a rockin' Allen Fieldhouse and an ESPN Big Monday audience on Monday night.

In the end, OU's Buddy Hield, a potential national player of the year candidate who led all scorers with 46 points and became the first opposing player to top 40 points in Allen Fielhdouse since 2008, could not lead the Sooners past Kansas and KU survived for a hard-fought 109-106, triple-overtime victory on the same day the Jayhawks climbed into the No. 1 spot in the polls for the first time since 2011.

Hield's 46 points were the second-most by a single player in Big 12 history, trailing only Melvin Ejim, who scored 48 for Iowa State in 2014.

Kansas (13-1) controlled much of the first half but saw the Sooners (12-1) storm into halftime with a 44-40 by closing the first 20 minutes with a 12-0 run. Jordan Woodard hit a pair of threes and Buddy Hield, who scored 22 first-half points, hit 3 of 4 free throws, including a pair that were the result of a Bill Self technical foul.

The game turned when: OU continued its impressive finish to the first half with a 10-4 run to open the second ,which pushed the Sooners' lead to double digits. Like the Sooners when facing a double-digit first-half deficit, the Jayhawks battled all the way back to force the three overtimes. And then it turned about 25-30 times during the overtime periods. Too many to keep track of, frankly.

Offensive highlight: With 12:12 to play and OU leading by seven, Selden picked up a loose ball on a throw-away by Hield and stormed to the other end, taking it all the way to the rim for a monster, two-handed stuff. Selden stared down the man he dunked over after the slam and KU pulled to within five.

Defensive highlight: Making the second-half start in place of Hunter Mickelson, Jamari Traylor quickly made Self look like a genius with a couple of big-time blocks that resulted in him hitting the deck hard both times. The first was a two-handed block in which Traylor pinned a shot against the backboard. The second was a flying swat in transition that prevented a sure fire slam dunk.

Up next: The Jayhawks will get the rest of the week to recover from Monday's war and will return to action at 8 p.m. Saturday at Texas Tech on ESPNU.