Here are some notes from KU's triple overtime win over OU on Monday. 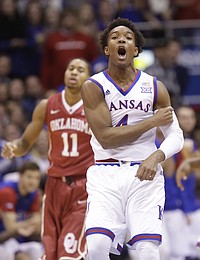 Bill Self on KU's 'incredible' 3OT win over OU

Kansas basketball coach Bill Self marvels at the display put on by the No. 1-ranked Jayhawks and No. 2 Oklahoma after KU's 109-106, triple-overtime victory at Allen Fieldhouse.

KU's Big Monday victory over Oklahoma featured a couple of teams enjoying a bunch of firsts. By Gary Bedore

Jayhawks thrilled to be back on top of AP poll

A little less than 12 hours before knocking off No. 2 Oklahoma, 109-106 in triple-overtime, Kansas University’s basketball team busted a bit of a drought on Monday, ascending to the top spot in the Associated Press poll for the first time since February of 2011. By Gary Bedore

Tom Keegan: Epic Big 12 showdown one for the ages

No. 1 vs. No. 2. Three overtimes. As loud a crowd as Dick Vitale ever has heard. No. 1 Kansas won the game, 109-106. Oklahoma was the opponent. There was no loser, least of all those lucky enough to witness it, lending rock-concert volume to the instant classic.