Wayne Selden Jr. takes his game to another level vs. Kentucky

The Jayhawks defeated Kentucky, 90-84, in overtime Saturday night at Allen Fieldhouse, but they didn’t do so without some struggles. KU made 30 free throws but missed 17. Perry Ellis (10 points, nine rebounds, 31 minutes because of foul trouble) was 8-of-13 at the line. By Gary Bedore 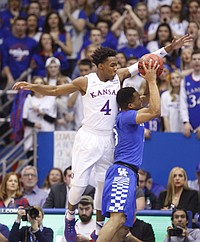 Saturday night, following his team's 90-84, overtime loss to Kansas during his first crack as a head coach inside Allen Fieldhouse, Kentucky coach John Calipari opened by dropping phrases like, “I'm sick to my stomach,” and “I'm still hacked off that we lost,” and then shared a story about a pre-game conversation that came eerily close to coming true. By Matt Tait

Bill Self: Jayhawks labored at times, but got job done vs. UK

Kansas basketball coach Bill Self rehashes the Jayhawks' overtime victory against fellow blue blood Kentucky, and says while KU labored offensively much of the night, the players got KU the needed result.

Selden, Mason and Graham on how KU beat Kentucky in OT