Not a good look: Frogs' Big 12 woes continue vs. KU

Facing some of the same challenges Kansas University does in football, TCU’s men’s basketball program continues to have a difficult time escaping the basement of the loaded Big 12. Saturday’s 75-56 loss to Kansas left the Horned Frogs with a 7-57 Big 12 record, including 1-9 in this, the school’s fourth season in the conference. By Tom Keegan 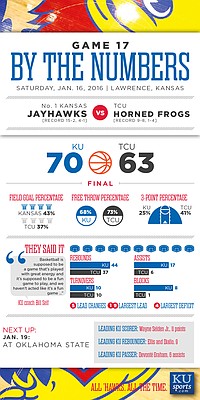