KU in the mix for forward Jarrett Allen

Jarrett Allen, a 6-foot-9, 225-pound senior forward from St. Stephens Episcopal School in Austin, Texas, who is ranked No. 20 in the Class of 2016 by Rivals.com, tells Zagsblog.com that five schools are recruiting him the hardest.

Kansas University’s basketball team, which lost its first Big 12 game of the season Tuesday night, 74-63, actually led, 14-9, early in Tuesday’s loss at West Virginia, thanks to some early three-point success.

Images from Tuesday night's game between the Jayhawks and the Mountaineers at the WVU Colliseum ... 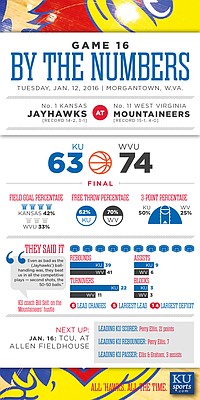