Hours before his team sealed the championship outright with an 86-56 drubbing at Texas, Kansas University basketball coach Bill Self on the Big 12 teleconference was asked if KU’s 12 straight titles reflects badly on the rest of the league. By Gary Bedore

Jamari Traylor accepted a pass from Devonté Graham and put down a thunderous alley-oop dunk midway through the second half of Monday’s 86-56 rout of Texas in Frank Erwin Center. By Gary Bedore

Both basketball teams playing a Big 12 game in the Erwin Center were coming off emotional victories two days previous. One handled it well, the other poorly. By Tom Keegan

Images from Saturday's game between the Jayhawks and Longhorns at Frank Erwin Center in Austin, ... 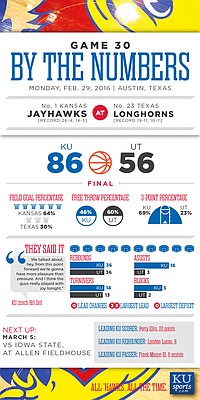