Threes by example: Graham's big first half sets tone for Jayhawks in 89-74 win

More content to set up teammates than score so far this season, Kansas junior Devonte’ Graham could not help himself Saturday afternoon during No. 4 KU’s 89-74 victory over Stanford at Allen Fieldhouse. By Matt Tait

After an 89-74 victory against Stanford on Saturday, Kansas basketball coach Bill Self met with the media to discuss Frank Mason III's strong performance, the disappointment with his team's defense guarding Reid Travis and much more.

Mason soars to top of ratings with amazing bucket and 20-point game vs. Stanford

Baseline View: Kansas takes over to bring down Stanford, 89-74 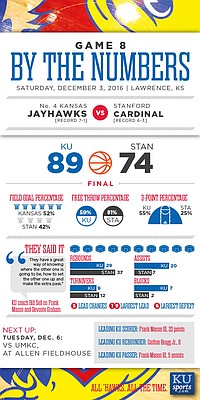 Tom Keegan: Even Frank Mason can impress himself with highlight play

Newsflash: Frank Mason smiled. And it was a big one. By Tom Keegan

Long before he ever put on a Stanford basketball uniform, Christian Sanders was just a kid in Allen Fieldhouse trying to out-play his fellow campers. By Benton Smith