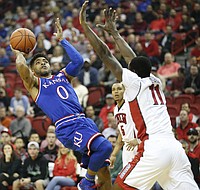 View a gallery of images from the Jayhawks' Thursday game against the Rebels in Las ...

The No. 3-ranked Kansas basketball team didn’t have to endure much of a fight until late in its first true road game of the season Thursday night at UNLV’s Thomas & Mack Center. The Jayhawks took a permanent double-digit lead less than eight minutes in against the Runnin’ Rebels, who, like most KU opponents, had no answers for freshman sensation Josh Jackson in a 71-53 Kansas victory. By Benton Smith

Tom Keegan: Running Rebels out of own gym no great feat these days

Anyone who thinks trading Las Vegas for Lubbock bumps the Red Sox trading Babe Ruth to the Yankees for the $100,000 Sox owner Harry Frazee used to finance a Broadway show into second place in the worst-trade-in-sports history standings obviously didn’t watch the telecast of Thursday night’s basketball game in Thomas and Mack Center.

With his left wrist in a soft cast and a sad stare on his face, Kansas freshman Udoka Azubuike watched Thursday’s 71-53 Kansas victory over UNLV in street clothes from the end of the KU bench.

In a city known for hosting world-class shows, Kansas freshman Josh Jackson put on one of his own during a dominant first half that led the third-ranked Jayhawks to a 71-53, run-away victory over the UNLV Runnin’ Rebels on Thursday night at Thomas and Mack Center.

Game blog: No. 3 Kansas at UNLV

On the 12th game of the season, the Kansas basketball schedule-makers gave to the Jayhawks: one showdown at UNLV — KU’s first true road game of the season. Bill Self’s 10-1 team, ranked No. 3 in the nation, takes on the 7-5 Runnin’ Rebels. In a different kind of season-first, the Jayhawks will play without freshman center Udoka Azubuike, who earlier this week suffered a season-ending wrist injury.