It's not that Chaminade coach Eric Bovaird was in the gambling mood, more that he knew packing the paint and daring Kansas to shoot was his team's only shot. It didn't work. 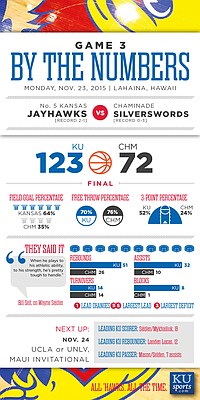 Kansas University basketball coach Bill Self offered up his daily Cheick Diallo update after Monday night's 123-72 victory over Chaminade in the Maui Invitational that KU athletic director was contacted by the NCAA on Monday and told that college basketball's governing body was, "working on it."

After a long trip and all of the distractions that paradise has to offer, a sluggish and sloppy victory by Kansas to open the Maui Invitational might not have surprised anybody, especially when you consider that Chaminade has been known to get hot from three-point range and ride the triple to some serious point totals. On Monday, it was Kansas that put up the serious point total, storming to a 123-72 victory. By Matt Tait

Images from Monday night's game between the Jayhawks and Silverswords during the first-round game of ...