Kansas junior forward Perry Ellis speaks with media in the locker room after returning to the starting lineup in KU's win over Baylor at the Big 12 Tournament. Ellis discusses how his knee held up in the semifinal and the Big 12 Championship game against Iowa State.

Everybody’s been talking about Perry Ellis and his sprained right knee. Garnering a lot less attention are the ailments of Kansas University sophomore Landen Lucas, whose “body is worn out right now,” KU coach Bill Self said before Friday’s KU-Baylor Big 12 tournament semifinal in Sprint Center.

Brannen Greene gets a three to drop

Column: Jayhawks back to winning games with rugged defense

When a young basketball player starts to talk like his coach, applies his standards, sees every blemish in the mirror, that usually is a sign of better days on the horizon. It means a team knows what it is and isn’t and knows what it will take to get the job done. By Tom Keegan

When it comes to conference foes who have faced each other a bunch of times during the past few seasons, players and coaches tend to know when something's off about a guy or team with which they are familiar. That was the case for the Baylor Bears on Friday night with Kansas' Perry Ellis, who scored 11 points and grabbed six rebounds in 26 minutes of a 62-52 Big 12 tournament semifinal victory at Sprint Center. By Matt Tait

Images from the Jayhawk's game against Baylor in the semi-finals of the Big 12 Tournament ... 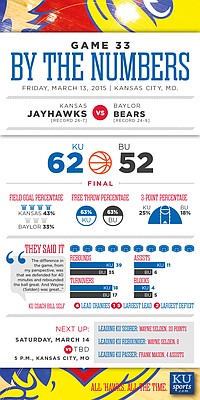