When Canada’s basketball team assembled a week ago for the upcoming World University Games in South Korea, coach Barnaby Craddock figured this week’s pair of exhibitions against Kansas University, the USA’s National Team, would go a long way in preparing his group for the competition ahead.

Kansas University coach Bill Self told his players at halftime that he wanted to see more energy on the court Friday. Senior Hunter Mickelson took the message to heart. 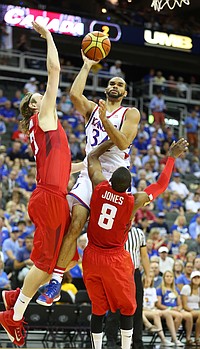 Images from Friday night's exhibition between the Jayhawks, who are representing Team U.S.A. in the ...

Under international and NBA rules, teams have 24 seconds from the time they gain possession of the ball to the time a shot must go up.

Kansas City, Mo. — The Kansas University men's basketball team swept Canada and grabbed plenty of momentum for next month's World University Games in South Korea with a 87-76 victory over Team Canada at Sprint Center on Friday.

In a back-and-forth game, the Jayhawks pulled away in the fourth quarter with their ability to get to the free throw line (28-for-32) and force the Canadiens into bad shots (9-for-28 shooting in the second half).

Carlton Bragg looked more comfortable in his second unofficial game for KU, scoring six points on 3-of-5 shooting with four rebounds. Hunter Mickelson also had a big stretch in the fourth quarter, finishing with 5 points, 3 rebounds, a block and a steal.

Stay logged on to KUsports.com throughout the night for much more from tonight's game.

• The game turned when: KU fought back from an early 10-point deficit with strong plays from Selden, Ellis and Mason down the stretch.

• Offensive highlight: As is almost always the case, a few dunks brought the crowd to its feet. Jamari Traylor finished an alley-oop from Mason in the final minute that put the finishing touches on the win.

• Defensive highlight: During his big stretch in the fourth quarter, Mickelson swatted a shot attempt and grabbed a steal on the next possession. He was rewarded with a big ovation from the crowd at the next whistle.

• Up next: The Jayhawks will travel to Korea on Sunday and play China in an exhibition game on Thursday.