Highlights from USA's 96-57 win over Switzerland

Some highlights from USA's 96-57 victory against Switzerland on Thursday, July 9 in South Korea. The Jayhawks finished pool play with an undefeated record in the World University Games.

Bill Self breaks down USA's 96-57 win against Switzerland

Kansas coach Bill Self talks about USA's 96-57 rout over Switzerland on Thursday, July 9 in the World University Games.

With the starters off of the court, Kansas University freshman guard Lagerald Vick made the most of his minutes in USA’s 96-57 victory against Switzerland on Thursday at DongKang College Gymnasium. By Bobby Nightengale Jr.

With six minutes left in the third quarter against Switzerland on Thursday, Kansas University senior forward Hunter Mickelson sprinted to mid-court for a loose ball. It didn’t matter that the United States men’s basketball team had already secured a spot in the World University Games quarterfinals. It didn’t matter that the Jayhawks had a 25-point lead on their way to a 96-57 victory at DongKang College Gymnasium. Mickelson wasn’t giving up on the play. By Bobby Nightengale Jr. 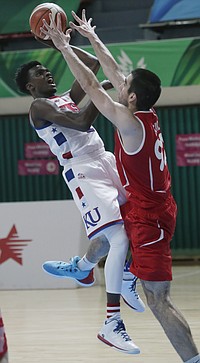 The Jayhawks (5-0) opened the second half with an 18-0 run, featuring three dunks by KU junior guard Wayne Selden Jr. in the stretch, to pull away.

Julian DeBose led USA with 18 points, Selden had 16, while Lagerald Vick and Perry Ellis both had 11. Stay logged on to KUsports.com throughout the day for much more from tonight's game.

• Up next: The Jayhawks will face a team still to be determined at noon Saturday (10 p.m. Friday CDT on ESPNU) at Dongkang Gymnasium.