More than 6,000 miles away from Lawrence, across the Pacific Ocean, Kansas University men’s basketball players have been supported by a number of fans who do the Rock Chalk chant at the end of games or chant “U-S-A” during the games. Drew Mountain, 30, was one of those fans Wednesday in USA’s 66-65 victory against Serbia. By Bobby Nightengale

Kansas junior guard Wayne Selden Jr. talks about his game-tying three-pointer and game-winning free throw in USA's 66-65 win over Serbia. Selden finished with a game-high 21 points, including 13 in the fourth quarter.

Bill Self talks about USA's 66-65 victory over Serbia

Serbian players were confident they would find a way to win after climbing back from a five-point deficit in the final minutes of USA’s 66-65 victory on Wednesday at DongKang College Gymnasium. By Bobby Nightengale Jr.

In the second quarter of Team USA’s narrow 66-65 Wednesday victory, Serbia switched to a hybrid 2-3 zone that caused problems for the Jayhawks.  By Bobby Nightengale Jr.

Box score from KU's game vs. Serbia on Wednesday, July 8 in the World University Games, in South Korea 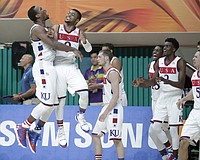 Photographs from Team USA vs. Serbia, Wednesday July 8, at the World University Games in ...

After demolishing Chile on Tuesday, the United States/Kansas University men's basketball team had to win a tight one against Serbia, 66-65.