When Bill Self needed a victory Saturday night at Sprint Center and decided the best way to get one would be shortening his bench in the second half, Kansas University’s basketball coach knew only one of the four big men sitting near him would get a crack at helping the Jayhawks rally. By Benton Smith 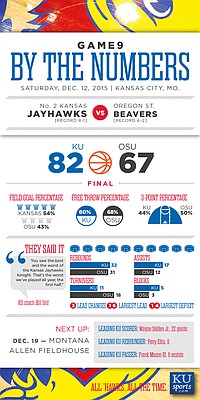 Oregon State senior Gary Payton II — son of former NBA great Gary Payton — entered OSU’s matchup with No. 2-ranked Kansas University leading the Beavers in scoring, but it was another father-son combo that stole the show for the first half Saturday at Sprint Center. By Chris Duderstadt