Kansas University’s players played a joke on freshman Cheick Diallo before what turned out to be a 94-61 rout of Loyola in Diallo’s first game with the Jayhawks. 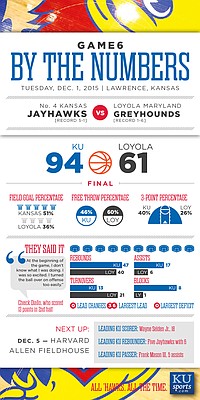 Loyola coach G.G. Smith came away very impressed by the debut of KU freshman Cheick Diallo during Tuesday night's 94-61 victory by the Jayhawks, which featured 13 points, six rebounds and three blocked shots by the freshman from Mali, Africa.