West Virginia junior point guard Juwan Staten of Dayton, Ohio, sat down with his father last summer to discuss goals for the upcoming season. Staten made becoming a unanimous first-team all-conference pick and Big 12 player of the year honors two of his primary goals. By Tom Keegan

Column: Kansas not so dynamic without freshman duo

Even on a day Andrew Wiggins totaled 41 points, eight rebounds, four blocked shots and five steals, he needed another superior talent, fellow freshman Joel Embiid, for KU to knock off a hungry West Virginia team that played a terrific game. By Tom Keegan

Andrew Wiggins far and away top Jayhawk in loss at WVU

Kansas basketball coach Bill Self, freshman Andrew Wiggins and sophomore Jamari Traylor discuss the Jayhawks' loss at WVU, and what's next for KU. 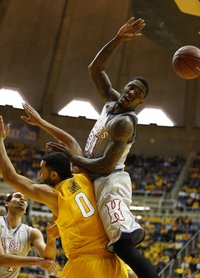 Images from Saturday's game between the Jayhawks and Mountaineers in Morgantown.

On a day when none of his teammates wanted to help him until the final 6 or so minutes of the game, Kansas University freshman Andrew Wiggins did all he could to keep No. 8 Kansas in the game, but the Jayhawks fell short in a 92-86 loss to West Virginia in Morgantown.

Wiggins' 41 points were the most by a single player in the Bill Self era at Kansas and marked the second most by a freshman in Big 12 history, behind only Michael Beasley, who once scored 44 for Kansas State.

Wiggins' big day came on 12-of-18 shooting and included 15 (of 19) from the free throw line. He also added 8 rebounds, 5 steals and 4 blocks before fouling out. 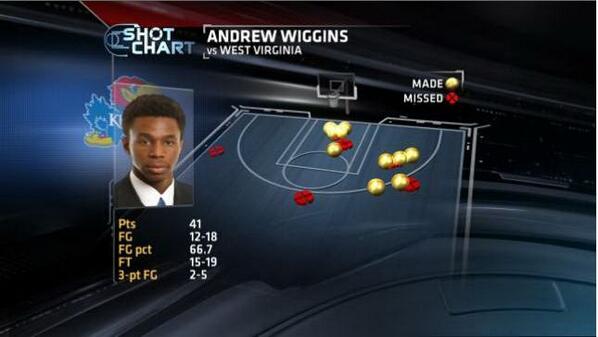 KU's late rally pulled the Jayhawks to within five, 85-80, with more than a minute to play, and four, 90-86, with around 12 seconds to play, but the Jayhawks never truly threatened after digging a huge hole early in the second half.

The loss drops Kansas to 23-8 overall and 14-4 in Big 12 play. West Virginia, which is desperately trying to get into the conversation for NCAA Tournament play, improves to 17-14 and 9-9.

The setback certainly seems to be a blow to KU's hopes of landing a No. 1 seed in the upcoming NCAA Tournament.

Here’s a quick look back at some of Saturday's action:

• The game turned when: West Virginia pushed a 12-point lead at halftime into an incredible 25-point cushion during the first several minutes of the second half, forcing Bill Self to use all of his timeouts by the 17-minute mark and putting the margin just high enough so the Jayhawks' furious comeback could not put them over the hump.

• Offensive highlight: KU's offense looked sloppy and sluggish throughout, but Andrew Wiggins showed up and did all he could to fill up the scoreboard. Wiggins' first-half block of Juwan Staten just inside 7 minutes led to a sky-walking flush on the other end. It appeared to be a huge spark at the time, but the fire quickly went out and KU found itself down double digits the rest of the way. Wiggins' late in-bounds steal and flush, seemingly all in one motion, also was pretty nasty.

• Defensive highlight: KU's defense was atrocious for most of the day, but Jamari Traylor deserves credit for his block of an alley-oop in the first half from Eron Harris to Juwan Staten. Traylor, who had his own issues with effort, intensity and focus, showed unreal athleticism and hustle to break up the lob and pick up one of the best blocks we've seen this season.

• Key stat: The Mountaineers were red hot in the first half and shot well from the free throw line, but the biggest key in this one was the fact that three different Mountaineers topped 20 points in scoring. That hasn't happened very often, if at all, against a Bill Self coached defense. Guards Juwan Staten (24) and Eron Harris (28) led WVU and forward Devin Williams, who scored 18 in the first half, added 22 points after scoring just 4 in the meeting in Lawrence.

• Up next: The Jayhawks will get some much-needed time off to watch film, regroup and get ready for the win-or-go-home portion of their schedule. Kansas will open play in the Big 12 Tournament in Kansas City, Mo., at 2 p.m. Thursday, when they face the winner of the Wednesday match-up between the No. 8 (Oklahoma State) and No. 9 (Texas Tech) seeds.