It turns out Kansas University freshman Joel Embiid would have been available for Thursday’s Sweet 16 matchup against Dayton, had the Jayhawks been able to defeat Stanford on Sunday in Scottrade Center. By Gary Bedore

Elite freshmen dominate the November news in college basketball. Superlatives fly. So do the freshmen. Sometimes they trip and fall, too. Then they get better as league play toughens them. And then the NCAA tournament arrives. So often, one-and-done pressure of an elimination tournament can reset the clock for teenagers experiencing something new. By Tom Keegan

With his team trailing by two points and his college basketball career in jeopardy, Kansas University senior Tarik Black made a pit stop on his way to the Kansas bench after picking up his fifth foul during the Jayhawks' 60-57 loss to Stanford Sunday at Scottrade Center. By Matt Tait

Sophomore Perry Ellis and senior Tarik Black discuss the loss to Stanford in the third-round of the NCAA Tournament, Sunday, March 23, 2014, in St. Louis, MO. 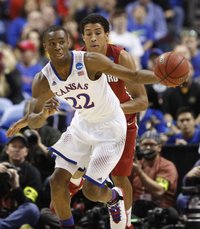 Images from Sunday's game between the Kansas Jayhawks and Stanford Cardinal.

Kansas basketball coach Bill Self, freshman Conner Frankamp and sophomore Jamari Traylor discuss KU's season-ending loss to Stanford, in the round of 32, Sunday in St. Louis.

St. Louis — The Kansas University basketball team's NCAA Tournament run came to an end at Scottrade Center on Sunday, when the Jayhawks fell to No. 10 seed Stanford, 60-57 in the Round of 32.

Stanford led most of the way and frustrated the Jayhawks with their size and toughness all over the floor.  That was particularly true against Andrew Wiggins, who likely finished his college career with one of his worst lines as a Jayhawk. Wiggins scored just four points, on 1-of-6 shooting and added four turnovers in 34 minutes. He went to the free throw line just twice.

"Well, I think they're long," KU coach Bill Self said of Stanford's defense, and how it limited Wiggins. We don't go against many teams that are bigger than us. The only position where we're as tall as them from a standing high standpoint is probably at the 3-spot with Andrew. He is about 6-7 and a half and they're about 6-7 there. So they bothered him with length.

"And I think he had an off game, too. Give him credit for that, but certainly he put himself in position to make some plays and didn't make them like he normally made them the majority of the season."

Tarik Black led Kansas before fouling out of his final college game. The big forward finished with 18 points and 6 rebounds in 26 minutes.

Freshmen guards Conner Frankamp (12 points on 4-of-7 three-point shooting) and Frank Mason (solid defense late in the second half) also played well in the loss on both ends of the floor, giving KU a chance when much of the rest of the roster was struggling mightily on offense.

• The game turned when: KU cut the Stanford lead to 44-40 with less than eight minutes to play and then picked up back-to-back steals in the backcourt but could not turn them into points. Frank Mason coughed it up on a drive to the rim, then misfired on a three-pointer from the corner. On the run-out, Stanford's Anthony Brown scored and was fouled to put Stanford back up seven, instead of KU being down just 44-43 or 44-42. KU eventually tied it at 49 but the Cardinal quickly rebuilt the lead to four and KU never again could get closer than two points.

• Offensive highlight: There were a couple of big-time passes from Frank Mason in this one, but few were as pretty or as big as the lob to Tarik Black with KU trailing 42-35 with just over nine minutes to play. The lob, which Black appropriately hammered the finish, unlike Jamari Traylor and Perry Ellis who couldn't finish them early. Mason also threw one to Landen Lucas, who flushed it early in the second half during his short time on the floor. Outside of those, there really weren't many offensive highlights for the Jayhawks, unless you like Tarik Black free throws.

• Defensive highlight: Andrew Wiggins picked up an incredible steal of a post-entry pass late in the game by using his length to poke it away and his balance to stay in bounds. KU's full-court press also wreaked havoc on the Cardinal for much of the second half.

• Key stat: The final numbers aren't in just yet, but KU missed a ton of shots at the rim in this one. Part of that is credit to Stanford's length and toughness inside. Part of it was KU just not being able to find its touch.

NCAA Tournament, Round of 32