Even after Kansas lost to Iowa State in the Big 12 semifinals, Jayhawks freshman Andrew Wiggins said he’s confident his team can win six in a row and the NCAA title. By Gary Bedore

In the waning minutes of Thursday's quarterfinal game between Kansas and Oklahoma State, the Jayhawks benefitted greatly from OSU's willingness to settle for jump shots with the game on the line. Kansas was not as lucky in the semifinals on Friday, as fourth-seeded Iowa State continually attacked the rim and exploited the absence of Joel Embiid in a 94-83 victory at Sprint Center. By Matt Tait 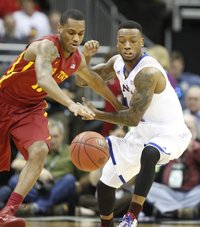 Images from the semifinal round of the Big 12 Tournament between the Jayhawks and Cyclones ...

Kansas City, Mo. — After a wildly entertaining offensive first half in which the both teams scored in just about every way imaginable, fourth-seeded Iowa State found a way to get stops and keep scoring during a 94-83 victory over top-seeded Kansas in the semifinals of the Big 12 tournament at Sprint Center.

Kansas led 48-46 at halftime but struggled to contain Iowa State's three-point shooting, which eventually led to easy buckets in the lane for the Cyclones, who cruised to victory after leading by eight or more from the 8-minute mark of the second half on.

Foul trouble plagued the Jayhawks at times, as both Andrew Wiggins and Tarik Black were forced to sit next to coach Bill Self because of foul problems.

The loss dropped the Jayhawks to 24-9 overall and snapped a five-game KU winning streak over Iowa State.

For the third game in a row, the Jayhawks had a player score at least 30 points — Perry Ellis finished with 30 — and for the second time in those three games the huge offensive night from one of KU's top options was not enough.

Georges Niang led Iowa State with 25 points, most of them coming on slow and methodical back-to-the-basket drives to the rim, and Big 12 player of the year Melvin Ejim added 19 and DeAndre Kane 20 for Iowa State, which improved to 25-7.

• The game turned when: Iowa State answered KU's 23-5 run that put the Jayhawks up 10 midway through the first half with a 17-6 run of its own that gave the Cyclones the lead back at 43-42 with 2:33 to play in the first half. Although KU still led by two at halftime, the run helped the Cyclones avoid that signature KU surge that usually buries teams.

• Offensive highlight: Perry Ellis was a magician in the first half, when he scored 21 points — two off of his impressive total from all of last season in this same game — and looked generally unstoppable at times. It took Ellis a while to get going in the second, but his and-one bucket with just over 10 minutes to play pulled KU within six (68-62) and pumped a little life into a KU offense that had done nothing for much of the half. A few moments later, Wiggins' put-back of his own miss on a hard drive to the rim was one of those plays where everyone else was still coming down from their first jump and he was already up there for his second to tap it home.

• Defensive highlight: During KU's 23-5 run in the first half, the Jayhawks' team defense was fantastic. Led by Tarik Black's presence in the paint, the Jayhawks forced several missed and off-balance shots in a row that led not only to frustration for ISU but also to transition buckets for the Jayhawks.

• Up next: The Jayhawks now will await their fate in the NCAA Tournament and will open play next Thursday or Friday in the second round. KU will find out where it's headed on Sunday and, if their destination for the first two rounds is St. Louis, as expected, they'll open NCAA Tournament play on Friday.