Players can't view a conference tournament like a breather before the NCAAs. Tarik Black knows it better than anyone on the Kansas roster because he’s played in more of them than anybody. By Tom Keegan

Jamari Traylor makes up for miscues with hustle plays vs. OSU

Thursday's 77-70, overtime victory by the Kansas University basketball team over Oklahoma State in the Big 12 tournament served as the stage for arguably the most Jamari Traylor night of any the Jayhawks have had all season. By Matt Tait

Joel Embiid’s dad, Thomas, says he believes his injured son will play in the 2014 NCAA tournament. By Gary Bedore

Even though his presence would have added a 7-foot shot-blocker in the paint who averaged 11 points, eight rebounds and blocked 72 shots during the regular season, Oklahoma State senior Markel Brown said he would rather have seen Kansas University's Joel Embiid on the floor during the Cowboys' 77-70, overtime loss to KU in Thursday's Big 12 tournament quarterfinal match-up at Sprint Center. By Matt Tait 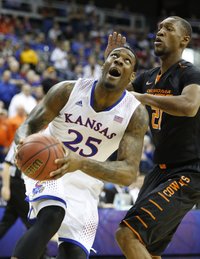 This time, however, it didn't cost them.

But foul trouble, turnovers and a tenacious Oklahoma State offense kept Kansas from pulling away and OSU actually took a couple of leads late in the game. But the Jayhawks were tough when it counted and forced the game to overtime, where they outscored the Cowboys 10-3 to pick up the victory.

• The game turned when: Tarik Black hit two free throws early in overtime to tie the score and keep Oklahoma State from building too big of a lead after a three-pointer by Phil Forte put the Cowboys up 70-68 a minute into the extra frame. The free throws sparked a 6-0 KU run from the 3:40 mark to the 37-second mark, which put KU up 74-70.

• Offensive highlight: Moments after a huge block of Le'Bryan Nash by Jamari Traylor at the 11:08 mark of the second half, Andrew Wiggins flushed home an alley-oop pass from Naadir Tharpe to put KU back up by eight (51-43) and breathe a little life into the Sprint Center crowd. The high-flying highlight came less than a minute after OSU had cut the KU lead to two — 45-43 — and sent Perry Ellis to the bench with four fouls, making the lob as big for KU's momentum as it was on the scoreboard. On back-to-back possessions late in the second half, KU threw lobs to Tarik Black and Andrew Wiggins to give KU a slim lead. And with a minute to play and OSU leading by two, Wiggins hit a nasty step-back, fade-away jumper from the baseline to tie the game at 67. Different spot, but reminiscent of his shot against Duke late in that game.

• Defensive highlight: With 4:40 to play in the first half, OSU's Le'Bryan Nash had great position inside on KU's Jamari Traylor, but as Nash went to the rim from the baseline, Andrew Wiggins crept in from the corner and blocked the shot forcing the tie-up and giving possession to KU. Later in the half, Traylor was in on another defensive gem, this time after blowing a layup in the final seconds of the half. Instead of watching the ball and pouting after the miss, Traylor raced down the floor and blocked an attempted buzzer-beater by OSU's Phil Forte from behind as the horn sounded.

• Key stat: How about Jamari Traylor's entire line? The reserve big man stepped up big-time for the Jayhawks to the tune of 6 points, 9 rebounds and 2 blocks in 27 minutes. Traylor made some mistakes and missed some easy shots but he more than made up for it with that line.

• Up next: The Jayhawks will face Iowa State in Friday's semifinals at 6 p.m. at Sprint Center. Iowa State knocked off Kansas State, 91-85, in Thursday's opening quarterfinal game.