Joel Embiid’s vision was hindered a bit by the goggles he wore to protect a swollen left eye on Wednesday in Noble Center. By Gary Bedore

It never pays to give up on a player talented enough to warrant a scholarship offer from Bill Self, Kansas University’s 11th-year basketball coach, because he never gives up on a player who tries to practice what he preaches. The smart ones figure that out. The immature ones play their way to the end of the bench, even out of the program. Put Conner Frankamp in the first group. By Tom Keegan

Despite tying a career-high with 32 points on 10-of-18 shooting, Oklahoma senior forward Cameron Clark and his teammates walked away with a 90-83 home loss to Kansas Wednesday night. By Matt Tait 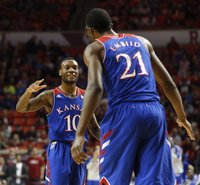 Norman, Okla. — Behind a career-high 24 points from Wayne Selden, another spectacular game from Perry Ellis (22 points, 11 rebounds) and an unexpected but solid contribution from Conner Frankamp off the bench, the Kansas Jayhawks improved to 10-4 overall and 1-0 in Big 12 play with a 90-83 victory at Oklahoma.

KU and OU played a fast-paced first half in which both teams scored inside and out throughout the half. KU shot a blistering 68 percent from the floor in the opening frame but led just 50-44 at the break thanks to OU's 18-of-20 showing from the free throw line in the first half.

Frankamp hit two big buckets in that half while spelling point guard Naadir Tharpe, who sat with foul trouble, including one inside the final five seconds from the top of the key and off the dribble.

In the second half, KU built a lead of as many as 11 points and held off a late charge from OU, which trimmed the Kansas lead to four points on a couple of occasions but could get no closer.

KU coach Bill Self picked up a technical foul in the first half and the Jayhawks responded to going down 43-39 after the technical foul shots with an 11-1 run to close the half.

• The game turned when: Self picked up his technical. KU had played a solid offensive game up to that point and, thanks to Selden, seemed to have plenty of energy. But the technical, which came quickly because Self had been riding the refs all night, seemed to ignite the inner anger in the Jayhawks, who were much tougher and hustled even harder after their leader got T'd up.

• Offensive highlight: It would have to be the first nine minutes turned in by Wayne Selden, who exploded for 15 points (which tied his career high) and knocked down three rhythm three-pointers and aggressively went to the rim as a result of the defense having to respect the jumper. Selden had as good a night as he's had in his young career and he really brought a lot of energy to the floor on both ends. In addition to his play

• Defensive highlight: After a quick miss with just over two minutes to play and KU leading by five, Wayne Selden poked the ball away from an OU player who appeared to have possession and a clear path to transition in front of him. KU did not gain possession, as the tie-up resulted in OU getting the ball, but it was one of those critical plays that could win a game someday.

• Key stat: Rebounding. After getting abused on the boards by San Diego State at home, KU responded by out-rebounding OU, 36-22, and keeping the Sooners to one shot on most possessions. The big guys did most of the dirty work but Wiggins added 6 rebounds and Frankamp even ripped down a couple.

• Up next: The Jayhawks will return to Lawrence for their Big 12 opener at 1 p.m. Saturday against Kansas State.