Sunday’s 61-57 loss to San Diego State was the KU men's basketball team's first defeat at home to a non-Big 12 foe since a 78-71 setback to Oral Roberts on Nov. 15, 2006, and now the Jayhawks are looking for answers. By Gary Bedore

Kansas University basketball coach Bill Self, who often talks about the importance of toughness, praised junior point guard Naadir Tharpe for playing, despite a nasty left-ankle sprain, on Sunday in Allen Fieldhouse. By Gary Bedore 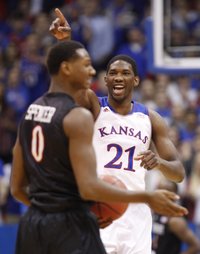 Following his team's 61-57 victory over Kansas University on Sunday at Allen Fieldhouse, San Diego State coach Steve Fisher sat in front of the media with the look of a math teacher and meticulously dissected all of the things that allowed his team to pull the upset. By Matt Tait

Embiid's double-double stands out in loss to SDSU

The rankings and the oddsmakers’ lines suggest that San Diego State’s 61-57 Sunday afternoon victory against Kansas counts as an upset. Nothing about it felt that way. By Tom Keegan

No. 21 San Diego State led nearly the entirely way and held off a furious comeback attempt from 16th-ranked Kansas to win 61-57 on Sunday at Allen Fieldhouse.

The Aztecs' victory was its third consecutive win over a Top-25 team, marking the first time in school history that such a stretch has occurred.

KU trailed by as many as 11 points in the second half on a couple of occasions but managed to cut the deficit to two a couple of times, as well. But the Jayhawks could not crawl any closer and the Aztecs won their 11th in a row and improved to 12-1 on the season.

KU, which was led by Andrew Wiggins' 14 points, fell to 9-4. Frank Mason also added 14 points for KU, which shot just 30 percent from the floor for the game.

• The game turned when: SDSU hit the glass. Although the Aztecs put together a couple of good runs to take a 29-23 lead into halftime, it was their ability to score on second chances in the second half that allowed them to keep their lead.

• Offensive highlight: There weren't many, but with 15:28 to play in the second half, KU took the ball on the break and watched Wayne Selden throw down a monster slam to pull the Jayhawks within six at 33-27. At the time, the team and the building were hopping, but a SDSU timeout followed by a 5-0 run by the Aztecs gave SDSU its largest lead of the game and the highlight slam went down as just that.

• Defensive highlight: There were no monster blocks, no ridiculous steals, just another solid night of on-the-ball defense from Wiggins, who often forced his man into an awful shot only to see the miss scooped up by a SDSU player right at the rim for an easy bucket.

• Key stat: KU nearly reached double digits in missed field goals right at the rim. SDSU had something to do with a lot of the misses, but several KU players still missed far too many in close. Had they hit just a couple of them, the late rally might not have been necessary and this one could've been a different story.

• Up next: The Jayhawks will open up Big 12 play at 7 p.m. Wednesday at Oklahoma.