Notebook: Self says some players flop, others 'sell' fouls

KU coach Self most certainly does give a flip that there’s been a lot of flopping going on in college basketball this season. By Gary Bedore 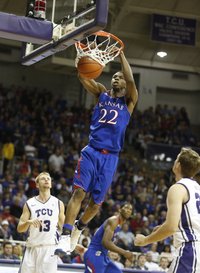 Images from Saturday night's game between the Jayhawks and Horned Frogs at Daniel-Meyer Coliseum in ...

The only Big 12 team with an unbeaten conference record kept rolling against the conference's only winless team, as Kansas University pounded TCU, 91-69, at Daniel-Meyer Coliseum.

• The game turned when: Wiggins got going, which didn't take long. The freshman lived up to his otherworldly expectations in the first half, and it began with a jumper and just kept coming. Wiggins scored 19 of his career best 27 points in the first half, leading KU to a 53-32 halftime lead.

• Offensive highlight: Strange as it may be, the bounce in Wiggins' step might have been the best thing caught on tape in KU's dominating road win. He drove, he dunked, he hit two three-pointers and even passed out an alley-oop to teammate Jamri Traylor for one of his career high five assists. When Wiggins plays at this level, KU is just about unstoppable.

• Defensive highlight: Still relatively early in the game — meaning TCU hadn't been beaten down into thinking it couldn't keep up with the Jayhawks — Embiid blocked an Amric Fields layup that would have got the Horned Frogs within two points with 13:20 to go in the first half. When Hudson Price hauled in the offensive rebound and the ball ended up in the hands of Karviar Shepherd, Embiid blocked him, too, then controlled the defensive rebound.

• Key stat: Ten Kansas turnovers. It was the lowest turnover total for the Jayhawks since they had seven in a home victory over Kansas State on Jan. 11. KU followed that with outings of 24, 19 and 16 giveaways. Kansas scored easily and often, hitting 31 of 54 shots, because it played mostly mistake-free basketball.