Naadir Tharpe stands out as top Jayhawk at Baylor

When a player arrives in college basketball lugging outrageous expectations and doesn’t hide his intention to stay just one year, it’s as if every game counts as 10. Do the math and that calculates to Andrew Wiggins being seconds from a 15-game slump when he stole a pass under the hoop, took a few dribbles and buried a half-court shot to beat the buzzer and the slump. By Tom Keegan

Baylor’s Brady Heslip hit four threes in eight tries the first half, then missed his only two attempts the final half of BU’s 69-52 loss to Kansas University on Tuesday in Ferrell Center. By Gary Bedore 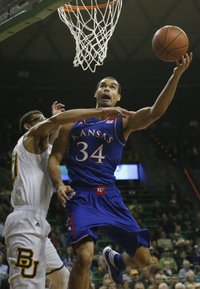 KU junior Naadir Tharpe followed up one of his worst games (on Saturday at Texas) with one of his best.

Behind 22 points on 9-of-13 shooting from Tharpe, Kansas bounced back from its loss at Texas with a 69-52 victory in Waco, Texas.

Tharpe's big night — along with a solid showing from Perry Ellis, who finished with 14 points and 10 rebounds — came at just the right time for the Jayhawks, as freshmen Andrew Wiggins, Joel Embiid and Wayne Selden went scoreless for quite a while in this one.

In fact, Wiggins, who got it going in spurts and finished with 14 points, 7 rebounds, 5 assists, 3 steals and 2 blocks, scored just three first-half points. Those came on a buzzer-beater heave from just beyond half court to put KU up 35-27 at the break.

Tharpe's 22 points left him one shy of tying a career-high, which he set earlier this season at Iowa State.

Here’s a quick look back at some of Tuesday's action:

• The game turned when: The Jayhawks responded to Baylor closing the gap to 45-42 midway through the second half with a 15-5 run, which featured nine points from Wiggins, who started slow but found his flow momentarily in time to help Kansas deal a knockout blow.

• Offensive highlight: After some great defense by Tarik Black, Tharpe caught an outlet pass and pushed the pace. With Ellis running down the middle of the floor to distract the Baylor defense, Wiggins flew up the floor on the wing and caught a perfect pass from Tharpe and flushed it for his second consecutive bucket. The highlight finish put KU up 54-44 with around 9:00 to play. Runner-up: How about that tear-drop floater that Tharpe hit with 7:00 to play?

• Defensive highlight: With Baylor's Gary Franklin holding the ball near mid-court and looking back to BU coach Scott Drew for the play, Wiggins poked the ball away from Franklin as he turned his head and raced to the rim. Wiggins missed the layup but KU had two guys hustling down to clean up the miss.

• Key stat: Rebounding. The Jayhawks outdid the Bears 45-31 on the glass, but it was not just the number that stood out. It was the way the Jayhawks competed on the glass and went after every missed shot with a sense of urgency.

• Up next: The Jayhawks return home Saturday to take on West Virginia at 3 p.m. at Allen Fieldhouse. The Jayhawks and Mountaineers have not faced each other yet this season.

Trying to bounce back from its first loss in almost four weeks, Kansas University's No. 8-ranked men's basketball team plays at Baylor, which snapped a five-game losing skid on Saturday, the same day the Jayhawks' seven-game winning streak came to an end.

The Jayhawks stand alone at the top of the Big 12 in first place. Baylor currently sits in ninth, ahead of only TCU.