Kansas University alumni Kent and Missy McCarthy have donated the lead gift for the financing of Phase One of the Fieldhouse Apartments project at KU, it was announced Monday night. By Gary Bedore 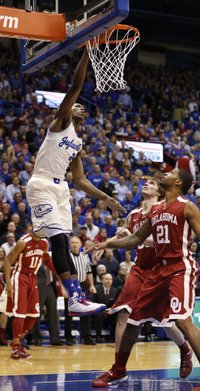 With the outcome of Monday's game hanging in the balance and Oklahoma within striking distance of gutting out its first victory at Allen Fieldhouse since 1993, the littlest guy on the floor slew the Sooners. By Matt Tait

The lyrics and notes change, but the song remains the same. High school All-Americans around whom their teams revolved come to Kansas University with little clue just how hard they must compete to maintain a winning tradition like few others in sports. By Tom Keegan

Behind five starters who reached double figures in scoring, the fifth-ranked Kansas University men's basketball team clinched at least a share of its 10th consecutive Big 12 title with a 83-75 victory over Oklahoma on Monday night at Allen Fieldhouse.

A complete and dominating performance like the Jayhawks enjoyed against Texas over the weekend it wasn't, but a grind-it-out, physical, NCAA-Tournament-esque game it was.

With OU leading for several good chunks of the second half and relentlessly pursuing the Jayhawks when they had the lead, KU (22-6 overall, 13-2 Big 12) flexed its muscles, picked up some clutch buckets from a variety of players down the stretch and held on for the eight-point victory.

KU led by as many as nine points in the first half and OU by as many as four midway through the second. But Kansas, behind 26-of-30 shooting from the free throw line, 7-of-16 shooting from three-point range and some big-time defensive stops down the stretch came away with one of its hardest fought victories of the season.

The Sooners had no answer for Joel Embiid inside early but quickly adjusted and forced KU into a few dry spells in its halfc-ourt offense. Two days after outscoring Texas 26-0 in fast-break points, KU finished with just 9 transition points in this one.

Here’s a quick look back at some of Monday's action:

• The game turned when: Jamari Traylor got offensive. With KU reeling a little bit and in need of something good on the offensive end, Traylor scored two buckets in a three-possession stretch to put KU back in front. The first came on a drive to the rim with KU trailing 58-54. After catching it at the free throw line, Traylor put it down, drove hard to the left and then stopped abruptly in the lane. After the OU defender went flying by him, he simply elevated and dropped it in. Two possessions later, Traylor knocked down a free-throw line jumper in rhythm and without hesitation, this time putting KU up 62-59. Although the Jayhawks still had to grind it out, Traylor's unexpected offense came at a huge moment and gave the entire Kansas bench a lift.

• Offensive highlight: This one really was a stretch of highlights late in the first half, started by Wayne Selden's aggressive drives to the rim that produced four straight free throws and capped by three-pointers from Selden and Frank Mason, as the Jayhawks found enough juice to rip off a 10-0 run in the final minutes of the first half to head into the locker room with a 42-33 lead.

• Defensive highlight: With 7:30 to play in the game, and with KU and OU locked in a dogfight on every possession, a hustle play by Embiid to get after a loose ball — created by a Naadir Tharpe poke-away in transition — led to a three-point play for Andrew Wiggins on the other end. The and-one possession, which featured a nice push-ahead by Brannen Greene, put KU up 65-61 with just over 7:00 to play.

• Key stat: Tharpe finished the game 6-of-7 from the floor and knocked in a couple of huge buckets in the final few minutes to seal the deal. This after a three-game stretch in which Tharpe made just 2-of-19 shots. The junior floor general sure picked a good night to find his shooting touch again. Tharpe finished with 19 points to lead all scorers.

• Up next: The Jayhawks will travel to Stillwater, Okla., on Saturday for an 8 p.m. clash with Oklahoma State. The Jayhawks held off the Cowboys 80-78 in a game they led big but had to hold on down the stretch to win as OSU sharp-shooter Phil Forte knocked in 7-of-10 three-pointers and led all scorers with 23 points, two more than KU's Tharpe.