Andrew Wiggins comes through on both ends, tops ratings

First-year Texas Tech coach Tubby Smith did just about everything a coach could do to set his team up for an upset Tuesday night in United Spirit Arena. By Tom Keegan

Kansas University freshman guard Wayne Selden wasn’t lacking in confidence as he went up for a huge three-point shot attempt with 2:34 left and the Jayhawks down by four points to Texas Tech on Tuesday night in United Spirit Arena. By Gary Bedore 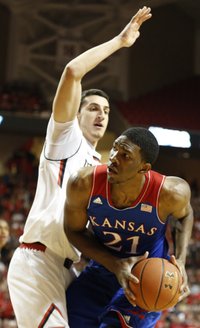 Naadir Tharpe swung the ball to Perry Ellis, who dumped it inside to Embiid, on the right block. When the 7-foot freshman center, who missed KU's game on Saturday with an ailing back and knee, turned toward the basket the ball escaped his hands.

Wiggins found the ball and secured it before the Red Raiders (13-13, 5-8) could capitalize, and the freshman guard scored with a short, floating shot in the paint, that bounced off the rim for dramatic effect before falling through to give KU the win.

Wiggins finished with 19 points on 6-for-11 shooting and six rebounds.

It was the second time in the final minute one freshman superstar saved the other. Wiggins missed a dunk with just more than 30 seconds to play, and Embiid grabbed the offensive rebound to finish with a slam.

That gave Kansas a temporary 62-61 lead before Embiid fouled Robert Turner and the Red Raiders junior guard hit both ends of a one-and-one with 16 seconds left, setting up the Jayhawks' final possession.

• The game turned when: Selden knocked in a 3-pointer with 2:35 to play. The freshman guard had made just 1 of his first 7 shots before his crunch-time bomb cut Tech's lead to 59-58. From that point on, a young KU team that hadn't handled a hostile United Spirit Arena or a slower Tech pace too well, realized it could still win the game.

• Offensive highlight: Other than the last two baskets, which were pretty remarkable in their own right, there were a few strong candidates in this one, despite a slow pace driven by Texas Tech's style. Tharpe dribbled past an open Selden, then the junior point guard bounced a pass between his own legs, behind him, to Selden for a 3-pointer that put Kansas ahead, 14-5, just more than five minutes into the game. But that play later got overshadowed by — what else? — Wiggins' athleticism. The spring-loaded freshman flew to the rim on a missed 3-pointer by Tharpe and slammed it home with a two-handed follow that grew the KU lead to 19-12 with more than 11 minutes left in the first half. In the second half, Embiid threw a cross-court skip pass to Wiggins on the left wing, and he took it all the way to the rim, cocking back a two-handed jam that cut Tech's lead to 49-48.

• Defensive highlight: The Jayhawks hadn't made many critical defensive stops until the final minute. That's when Wiggins blocked a Jaye Crockett jumper from the left wing. The ball went right back to Crockett, who forced up another shot, contested by Wiggins. The long rebound ended in a tie-up and KU had the possession arrow pointing its direction. All of that came with KU down, 61-60, in the final minute of the second half.

• Key stat: Thirty free-throw attempts. Kansas never would have been in this one had it not converted at the foul line. Tech played physical defense, and the Jayhawks made sure to be the aggressors on offense so they could earn some easy points at the charity stripe. KU hit 22 of its 30 tries (73 percent), with Wiggins and Embiid both going 6-for-8. Tech was just 9 of 14 at the foul line.

Thirteen games into their Big 12 schedule, the No. 8-ranked Kansas Jayhawks are playing Texas Tech for the first time in 2014.

The Red Raiders (13-12, 5-7) also have won three of their last four. Tech fell by six points at Iowa State on Saturday.