Notebook: White gives it his all in rare minutes

Membership on a team, any team, is a privilege, not a right. Jamari Traylor, Kansas University’s third-year sophomore reserve forward, did something to have that privilege revoked for a game that his teammates lost without him. By Tom Keegan

The reality of it was, TCU basketball coach Trent Johnson was not all that upset with his team after a 95-65 loss to No. 7 Kansas University on Saturday afternoon at Allen Fieldhouse. Not that you'd know that from listening to a few of Johnson's post-game soundbites following the loss. By Matt Tait 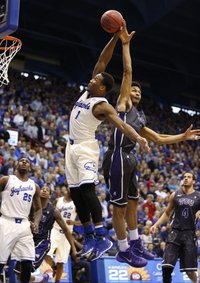 With “I Dream of Jeanie” star Barbara Eden in the house, Kansas University forward Perry Ellis flashed a little magic of his own, exploding for a career-high 32 points during one of the best all-around efforts of his young KU career in leading Kansas to a 95-65 victory over visiting TCU.

Ellis had modest numbers in the first half, leading Kansas with 11 points on 5-of-7 shooting. But he exploded in the second half to put the finishing touches on his career day.

Ellis finished 13-of-15 from the floor, 4-of-4 from the free throw line and 2-of-2 from behind the three-point line. Entering the game, he had made just five three-pointers in his career and shot just 12 of them.

In addition to his scoring outburst, Ellis chipped in 8 rebounds, 5 assists and 2 steals.

He was so dominant that after his second three-pointer of the day (also a new career-high), the KU fans began chanting his name for a short stretch and showered him with a standing ovation and more chants of “Per-ry, Per-ry, Per-ry” after he checked out with four minutes to play.

In his first game back from a one-game suspension, Jamari Traylor also reached double digits with 10 points (a season-high) and 8 rebounds.

Kansas (19-6 overall, 10-2 Big 12) played this one without Joel Embiid, who sat because of knee and back injuries, and Brannen Greene, who was benched because of what KU officials called a “pattern of irresponsible behavior.”

KU is hoping for Embiid to return to practice on Sunday and play on Tuesday at Texas Tech. And we should hear more on Greene's story after the game, as well, so check back with KUsports.com throughout the evening.

For now, here’s a quick look back at some of the action:

• The game turned when: The hammer dropped early in the second half, when Kansas turned a seven-point halftime advantage into a 19-point lead in the first five minutes of the second half. But the real separation came late in the first half, when KU closed on a mini-run that turned a two-point, tight affair into a comfortable lead for Kansas. Wiggins and Conner Frankamp both drilled three-pointers in the final stretch of the first half to give KU a little room to breathe.

• Offensive highlight: Several Jayhawks had nice offensive days and looked very aggressive in seeking out their shots and driving to the rim, but the single most impressive highlight came with 17:12 to play in the second half, when Wiggins threw a soft lob to Tarik Black, who was bumped by a defender on his way to go get it, yet still had enough height and reach to grab it and throw it down with both hands. The alley-oop put Kansas up 12 with 17:08 to play. Less than two minutes later, a game of keep-away involving Selden and Wiggins resulted in another lob, this one from Ellis in the paint to Wiggins, who came crashing hard from the wing to flush it. That oop put KU up 60-41 with 15:21 to play.

• Defensive highlight: Let's go with the first five minutes of the second half. KU forced the Horned Frogs into two quick timeouts — including one five seconds into the half — and limited them to just one point. It was a total team effort, too, as the Jayhawks turned the pressure up all over the floor. In the back court, in the front court, on out-of-bounds plays and, of course, in the stands, too, as the Allen Fieldhouse crowd got loud and showed its appreciation for a strong defensive start to the second half after Kansas gave up 40 points on 57 percent shooting to TCU in the first half.

• Key stat: KU again dominated points in the paint — 56-18 — but this time it came against decent size, as TCU started 6-10 Karviar Shepherd (who did next to nothing) and 6-9 Amric Fields. Neither player could so much as make KU to think twice about attacking the rim.

• Up next: The Jayhawks will travel to Texas Tech on Tuesday night for their first match-up with the Red Raiders this season. The game is scheduled to tip off at 7 p.m.