Devonté Graham's ankle should be fine

Kansas University basketball coach Bill Self did not know until after the game that Georgetown’s players wore “I Can’t Breathe” T-shirts during pre-game warmups Wednesday in Verizon Center.

In team sports, confidence for a struggling player almost always starts building when that player has reason to believe he made a major contribution to a victory. For ballyhooed freshman recruit Kelly Oubre Jr., that seed took root Wednesday night in the Verizon Center. Column by Tom Keegan

The Georgetown basketball players, to a man, wore, “I Can’t Breathe,” T-shirts during warmups and the national anthem before Wednesday night’s 75-70 loss to Kansas University. Hoyas senior center Joshua Smith explained that they did so to support the family of Eric Garner, who died in New York City after a policeman put him in a choke hold while arresting him for selling loose cigarettes. By Tom Keegan 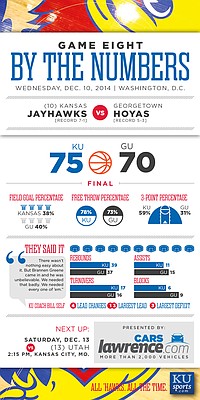